On Friday, 27 September 2019, the Research Festival Lower Austria and the European Researchers‘ Night took place in Vienna. Of course, the St. Pölten UAS did not miss this opportunity and attended with a total of 9 stations and a show act.

At both events, our researchers were able to provide the audience with exciting insights into the research activities and projects of the St. Pölten University of Applied Sciences. All stations focused on the direct exchange with visitors and gave them the chance to experience the projects at first hand.

At the European Researchers’ Night, visitors had the opportunity to get to know the “Wearable Theatre” – a new form of theatre which expands the possibilities of storytelling by including Virtual Reality elements.

At the Research Festival Lower Austria, the stations presenting the software tools “Travelling the Future” and “’In or Out’? All you need to know about musicians on YouTube” – which were developed at the St. Pölten UAS for booking trips on cargo ships or for analysing and visualising the development of a song’s popularity on YouTube – allowed visitors to give them a try directly on site.

Visitors were also able to test an Augmented Reality mobile phone app for patient information on squint surgery at the station “How can I use a mobile phone to explore the human eye and, at the same time, acquire new medical knowledge?”. Under the guidance of edutorials – which were specifically developed for this purpose in the course of the research project – the station “Old Woodcraft Techniques, New Cinematic Formats” allowed visitors to take a seat at the workbench and produce their own fence nail.

The research group “Digital Technologies” focused on the topic “Cooperation between Men and Machine” at the station “What will the intelligent factories of the future look like?”. Visitors were able to try collaborating with robots on different activities, e.g. playing tic-tac-toe or sorting chocolate lentils. At the station “How do I protect myself against acoustic tracking?”, visitors were shown how mobile phones can transmit data via ultrasound – sometimes even secretly. Fortunately, the app SoniControl provides a remedy.

Our station “What would you take with you if you had to flee from your home?” dealt exactly with this question. Fortunately, most of us have never experienced the situation of suddenly having to leave home and being able to take only a few belongings along. Visitors were asked to pick as few as three items that they would take with them and, in conversation with the researchers of the Ilse Arlt Institute, they had the opportunity learn more about the actual experiences of refugees. 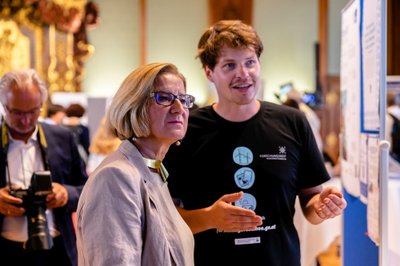 At our station “How can a virtual 'mirror image' assist us in relearning movements?”, researchers of the St. Pölten UAS showed interested visitors, among them also the governor of Lower Austria Johanna Mikl-Leitner, how to capture three-dimensional movements using Motion Capturing techniques and how to use this information in Virtual-Reality scenarios in motor rehabilitation.

Live Demonstration on the Topic of Mobile Phone Security

Another highlight was our show act “How are mobile phones spied on and what can we do about it?” at the Research Festival Lower Austria. For this show, our researchers Sebastian Schrittwieser and Matthias Zeppelzauer showed live how “unsuspicious-looking” apps can read out various data from mobile phones and elaborated on how users can protect themselves. Numerous questions from young and old visitors underlined the great interest of the public in this topic.

Links to the presented research topics:

(No) Baggage: About Things Brought Along, Left Behind and Newly Acquired in the Context of Flight and Expulsion