A Report on the Virtual c-tv Conference 2020 at the St. Pölten UAS

The c-tv conference on 13 May 2020 examined how and where AI, Blockchain and 5G disrupt conventional ways of working, and how ethically responsible production could be guaranteed.

Due to the current situation, this year’s c-tv conference took place online – and resulted in eight hours of live broadcast (five hours thereof in two parallel tracks) with as many as 34 speakers in 13 sessions on three platforms with 1,800 accesses to the streams and 280 participants on the interactive platform.

“We have truly accomplished something to be proud of here! To prepare a normal conference is a challenge but to do it online and at such short notice is quite another matter. I want to thank all involved students, speakers and the event team for their courage and creativity and for sharing their expertise in finding solutions to the multifaceted tasks provided by this online conference”, explains Rosa von Suess, lecturer and head of the educational television channel c-tv at the St. Pölten UAS, and organiser of the conference.

The keynote speech on Artificial Intelligence was held by Tobias Queisser from the start-up Cinelytic which works together with major players such as Sony and Warner in Hollywood. Mr Queisser demonstrated how Artificial Intelligence shapes the new digital film industry and how AI systems have the power to support film studios like Netflix, Warner, Disney and others.

“When it comes to AI, it is important to distinguish between hype and reality. We at Cinelytic have combined our know-how from the finance, entertainment and science/technology sectors to create a business intelligence system that allows the film and TV industry to take faster and better informed business decisions along the entire value chain of a film, from financing to distribution. We do this by integrating comprehensive data, analysis and project management tools on an online platform”, says Tobias Queisser.

Start-Ups and Blockchain as the Key to Success

Several lectures on the Blockchain technology illustrated how film production, complex cash flows and distribution are transformed by Blockchain applications. Franz Fidler, area lead of the Austrian Blockchain Center, used his lecture to provide information on the use of the technology for film and TV. “In media production in particular, the transparency and traceability of Blockchain solutions offers huge advantages in terms of rights management, licencing and authentication”, explains Mr Fidler who is responsible for topics relating to Blockchain in emerging industries at the St. Pölten UAS.

Start-up founder Irina Albita presented FilmChain, a promising Blockchain application which already enjoys great attention in the film industry. “Technology has the power to facilitate the cash flows from the viewers to the filmmakers. Through our Blockchain-based application, we offer independent productions and media companies transparency, automatic payments, fast reports and insights into the performance. In this way, filmmakers maintain control of their revenues and the sales development of their film titles at all times”, says Ms Albita.

The keynote speech on the potential and application possibilities of 5G for the TV world was held by Daniel Wolbers, head of product management, networks and product innovation at Media Broadcast, one of the most important broadcast system providers in Germany. “The availability of 5G frequencies for own campus networks will soon open up innovative application areas for broadcasting corporations, production and events. The new technology offers a lot of potential, for instance when it comes to the use of wireless cameras and equipments or for the wireless transmission of TV signal to the direction. The flexibility accompanying the 5G technology will fundamentally change the way content is produced in the next few years“, states Mr Wolbers.

In the morning, the conference entailed a special programme hosted in collaboration with WKO Film- und Musikwirtschaft NÖ. On the specifically created platform, participants had the opportunity to choose between three programme items: individual master classes held by industry experts, the Tech News on state-of-the-art production technology, and a pitching session which saw students of the Media Technology study programmes of the St. Pölten UAS present new format ideas and series pilots.

The conference was concluded with an ORF DialogForum on the topic “New Technology – New Ethics?” including a keynote by Jessica Heesen, head of the research focus Media Ethics and Information Technology at the University of Tübingen. The programme of the DialogForum was developed in a partnership with the Symposium of Media Ethics of the St. Pölten UAS.

“Artificial Intelligence, social media and influencers are drivers for fake news and conspiracy theories, which is why media ethics is more sought-after and important than ever”, says Michael Litschka, lecturer and organiser of the Symposium of Media Ethics at the St. Pölten UAS.

The entire keynote stream and the closing DialogForum of the conference were broadcast live at derstandard.at/etat and the DialogForum was made available on the ORF website as well. Viewers and participants had the opportunity to interact on the platform of the c-tv Conference.

The c-tv conference in social media 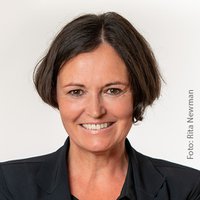