There were 2,115 Nazi camp sites in Austria, 372 of them in Lower Austria. Today, many of the former Nazi forced labour camps can no longer be recognised as such – or hardly – because material traces have been removed, built over, or transformed.

A project with the participation of the St. Pölten University of Applied Sciences collects those traces with help from the public and prepares them in artistic and media-technological manners – recently, for instance, on the example of the quarry in Roggendorf/Pulkau.

Today, the sites of former Nazi forced labour camps are often wasteland, housing estates, parking lots, recreational facilities, or are used as buildings for other purposes. The history of these Nazi camp sites has only rarely remained anchored in regional and local memory and is often unknown in the respective places today – also due to the fact that there are hardly any contemporary witnesses left and it is still challenging to find a way to include the sites into the public discourse. 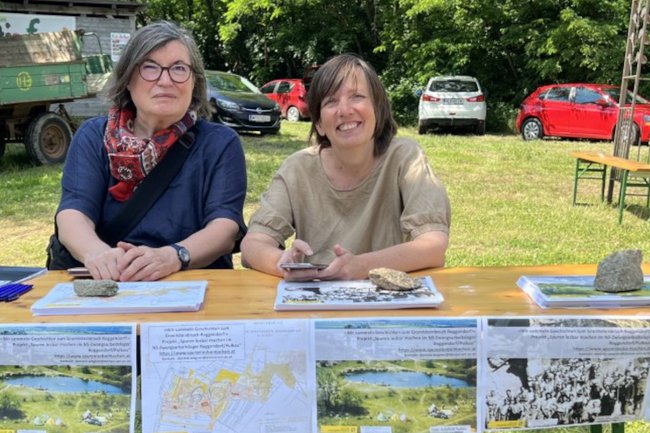 Searching for Traces in Quarry Roggendorf/Pulkau

As part of a joint research project, the University of Continuing Education Krems, the Institute for Jewish History in Austria, the Austrian Academy of Sciences, the OpenGLAM.at association as well as the St. Pölten UAS, and the artists Rosa Andraschek and Martin Krenn are embarking on a search for traces together with local communities: recently, the project invited the public to share their memories and/or inform themselves about the knowledge of historians in the quarry in Roggendorf/Pulkau.

During the Nazi era, Soviet Russian war prisoners as well as Polish, Ukrainian, and Jewish-Hungarian forced laborers worked in the quarry. As part of a history workshop, people from the region were able to relate their experiences of the quarry and their knowledge about it in interviews. The archaeologist Claudia Theune from the University of Vienna offered guided tours through the area.

“People have brought photos, videos, and other documents that are being digitalised for the project and the Topothek Pulkau. Depending on their age, they have shared their memories of dealing with forced labour in the quarry or the stories told in the village, but also about the wider history of the quarry, which among other things is used as a venue for a creative festival and, for a long time, was a bathing area where all kinds of sunken artefacts from the Second World War were discovered”, says Georg Vogt, Senior Researcher of the research group Media Creation at the St. Pölten UAS. 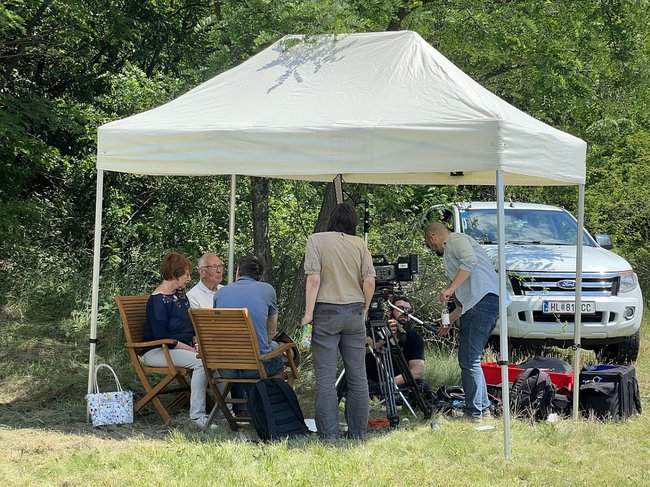 Interviews at the former Roggendorf/Pulkau quarry about the project. Credit: FHSTP Georg Vogt

Digital and Real Commemorative Culture on the “Camp on the Doorstep”

The project uses digital technologies to create new artistic formats and ways to remember, read, and visualise forgotten places with a burdened history. New knowledge arises at these places from the research and the collaboration with the public.

The project sees itself as an experimental arrangement with a lab character, in which art, science, digital and creative media technologies as well as participatory knowledge production enter into dialogue with local communities and jointly develop new digital organisational forms of memory culture.

On the basis of state-of-the-art digital tools, sites of Nazi terror should be rediscovered and new access points developed. What happened should be preserved, thus serving as an anchor point to tell and carry on history. The aim of the project is to make the sites of Nazi events tangible and to raise awareness of their immediate proximity – the “camp on one's own doorstep” – to local communities.

The project also wants to enable local public engagement. The participatory involvement of local and regional project partners is intended to provide new artistic impulses and includes, for example, the municipality of Pulkau, the Krahuletz Museum Eggenburg, the Museum Retz, the Museum Horn and local communities (the cultural association “Bildung hat Wert” and other associations in Pulkau such as the Bibliothek-Mediathek Pulkau).

The historical documentation, the digital collection, the digital tools, guides, and tutorials as well as all other project results will be available free of charge (open access) and thus available for other cultural institutions and/or communities to set up digital spaces dealing with forgotten Nazi camps.