A prize to honour outstanding performances: the Golden Wire is awarded to the best student projects in film and media

After a break of one year, an international expert jury honoured outstanding media technology projects by UAS students and alumni with the Golden Wire, the media award of the St. Pölten UAS, once again on 23 November 2021. For the first time, the event was not held on site at the UAS but streamed live.

"We all would have loved to stage the Golden Wire in its usual setting in the Main Auditorium. Due to the coronavirus pandemic, however, we decided to hold the award ceremony online and give access to a larger audience via livestream", the event team said after having to adapt to continuously changing framework conditions at very short notice. 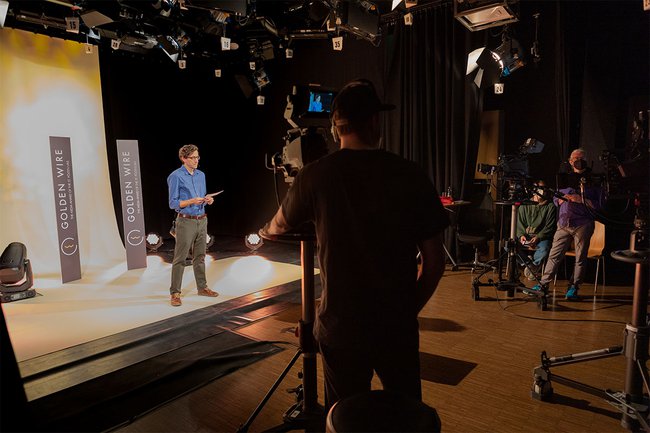 Many interested persons followed the invitation to look on as the nominated contributions were presented and the winners chosen. We are glad about the lively interest and would like to thank the audience and congratulate the winners of all seven categories!

Courageous. Touching. Shocking and rousing. Entertaining. Appealing. Bold and provocative. These are apt words to describe the presentations that reached viewers via their screens at home.

Although very different in style and message, all submissions nevertheless touched the audience in the same way. The jury was also impressed by the nominated projects which were technically convincing, had the desired emotional effect, and succeeded in telling their unique stories.

The video "St. Pölten UAS – 25 Years of Changing Media" (conception & production: Dritter.Akt), which was conceived by the two UAS alumni Alexander Weber and Victor Jim Moye-Noza and implemented together with the St. Pölten UAS under the auspices of Rosa von Suess, also went down well with the audience. It premiered during the Golden Wire voting stage and takes its viewers on a time journey through the world of media. 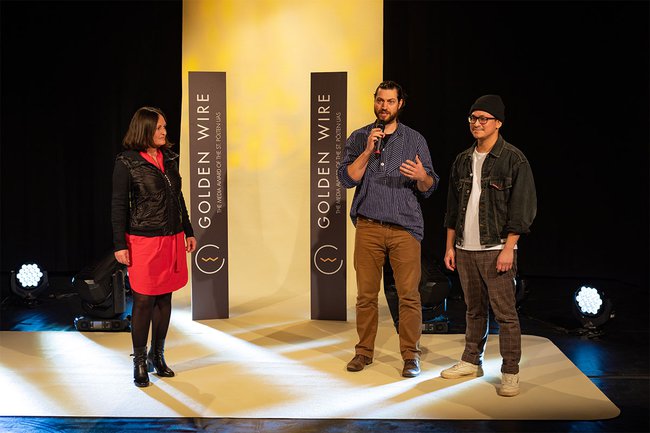 The media change us, while we change the media. "So much is possible today that would have been unthinkable 25 years ago when the St. Pölten UAS was founded and welcomed its first students to the degree programme ‘Telecommunications and Media", says Franz Fidler, Head of the Department of Media and Digital Technologies.

"We now have a wide range of digital and technical tools and creative possibilities in media production at our disposal that both shape us and are shaped and further developed by us at the same time. This is not only rendered visible in this film but was also impressively demonstrated once more at this year’s Golden Wire." 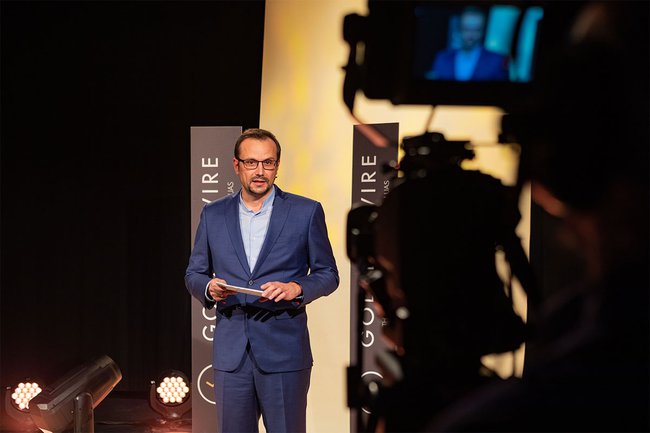 Head of the Department of Media and Digital Technologies Franz Fidler at the Golden Wire 2021 | Copyright: Carola Berger

Winners were chosen in the following categories:

A team made up of several UAS staff members and students from the optional subject "Golden Wire" was responsible for planning and carrying out the event. It is them who make the "highlight of the academic year" (to quote the opening address by Alois Frotschnig, Chairperson of the UAS Board) possible in the first place. 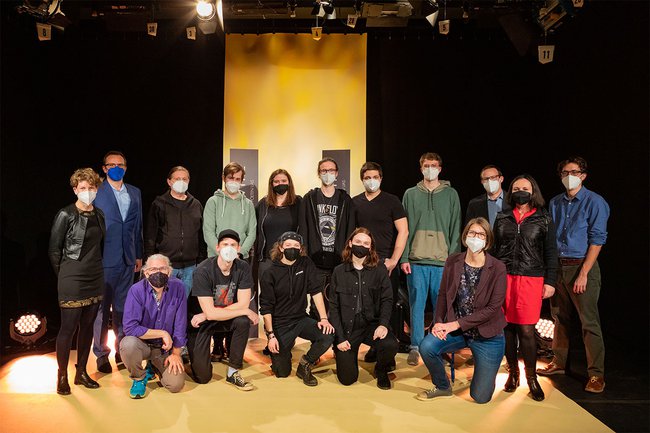 The Team in front and behind the camera | Copyright: Carola Berger

This year, it was necessary to switch to a streaming format at rather short notice, which was a particular challenge for the event team. "Moving the Golden Wire from the Main Auditorium to an online setting meant that we had to reconsider most of the schedule, create a stage set for the TV studio, adjust the live graphics, and integrate the jury and nominees into a professional production via MS Teams", explains UAS lecturer Michael Bock, whose team is responsible for technical processing. "We are proud of this achievement. The entire team showed extraordinary dedication and motivation, which made the professional hosting of this event in the TV studio possible despite the pandemic."

A big thank you is due to all video and audio technicians and event experts involved in the organisation and technical implementation as well as presenter John Valliere and the expert jury.

You can watch the event here