The aim of this project was to find a solution for the “text neck”-problem. After a detailed literature research the idea to delevop a device to remind smartphone users to lift their head after using their mobile device for a certain time came up

Smartphones and mobile devices are more and more present in our daily life. With the constant growth of mobile users all over the world, new health conditions are occurring; so-called “digital diseases”. Looking down at a smartphone or mobile device for an extended period might lead to posture problems, also known as “text neck”(Fares et al., 2017).

Aiming toward a solution for the “text neck”-problem a detailed literature research regarding the topic leads to the idea of developing a device to remind smartphone users to lift their head after using their mobile device for a certain time. This was followed by a survey which included handing out questionnaires and user-interviews. The survey was conducted between March 1st and May 20th 2018. Our target group were adolescents aged 16 – 18. Three user-interviews have been carried out.  Furthermore, 37 questionnaires have been completed during the survey period.

After performing a qualitative content analysis of the user-interviews and evaluating the questionnaires, a first prototype was developed. Later an app was developed and launched in the App Store on Dezember 14th . During the time from 15th of December 2018 till 20th of January 2019, 18 users have been recruited and tested the application. The application was evaluated according to the SUS-Score.

The outcome of the literature is showing, that a heavy mobile device usage can lead to poor posture and has negative effects on cervical spine posture, which is especially bad for children and adolescents (Xie et al., 2017). It is more likely for older kids to own a smartphone themselves. Nearly every teenager has a smartphone these days and spends at least 2 hours per day using it actively (Education Group GmbH, 2017; Feierabend, Plankenhorn, & Rathgeb, 2017; Rideout, 2015).

The user interviews in combination with the questionnaires is showing that there is a need to raise awareness for this topic. Based on that an application was developed. The application was coded with Android Studio Code and runs on mobile phones with an android operation system. The app uses the acceleration sensor to track the position of the phone. With the collected data an evaluation of the smartphone usage can be made. The app tracks the position of the phone only when it is manually activated, the screen is turned on and it is running in the background. If the app measures an activity for a certain time it sends a push notification along with vibration. With the phone’s notification sound the user is suggested to take a break. When the user clicks on the notification, the application opens and shows an activity which will animate the user to stop watching on the phone for a short time and to move the head.

Furthermore, a link to a website with neck and back exercises is shown. Here is a link to the video which explains how the app works: Chin up Tutorial. The app is also available on the Google Play Store: ChinUP Application. The application was then tested by people of the target group. The main part of the following survey was to evaluate the usability and acceptance of the developed application. According to the feedback of the respondents the usability of the application is excellent (SUS Score 85,6).

Ongoing discussions in the national and international media as well as publications addressing the topic of heavy mobile phone use and its negative effect on the cervical spine prove the relevance and importance of the issue. There is no doubt for the need of a solution. With the successful development and the release of the App on the Google Play Store we can now actively apply this solution. Feedback has been given and implemented. It is very likely that further improvements and adaptions will be considered. 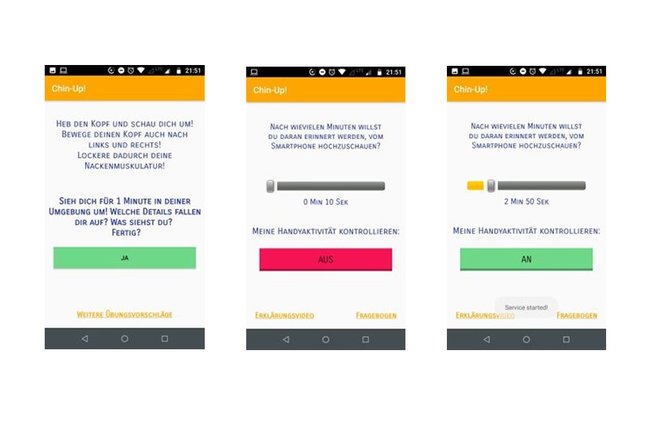